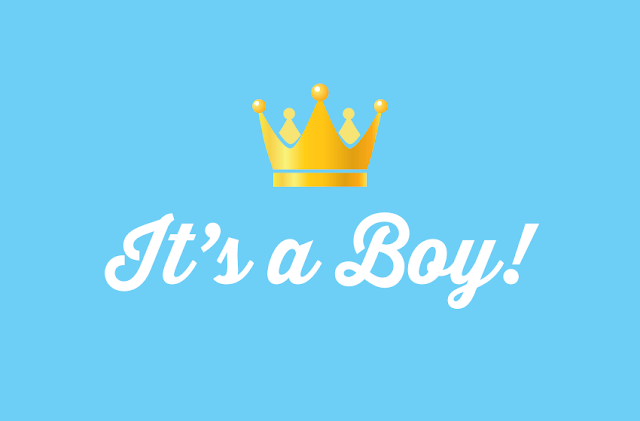 
31-year-old Duchess of Cambridge was admitted to her birthing suite at St Mary's Hospital in London at 6am.


Ten hours later the Duchess gave birth to a baby boy with husband Prince William and mother Carole Middleton at her side. 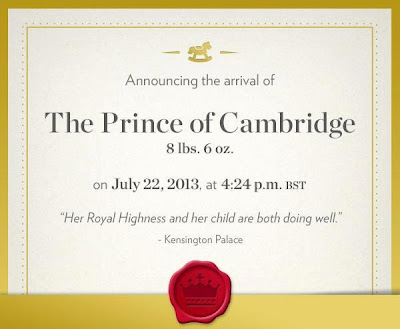 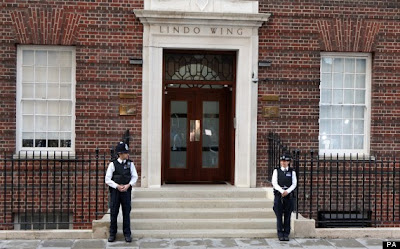 Mother and son are in good health, with the statement saying: "Her Royal Highness and her child are both doing well."


The baby weighs 8lbs 6oz and was born at 4.24pm. Unlike in previous years, the announcement was made by press release and not via an easel on Buckingham Palace. This was so that the confirmation was made as "quickly and simply as possible".


The happy arrival follows the announcement of Kate's pregnancy by Clarence House on 3 December last year.

The baby, who is unnamed, is fourth in line to the British throne. 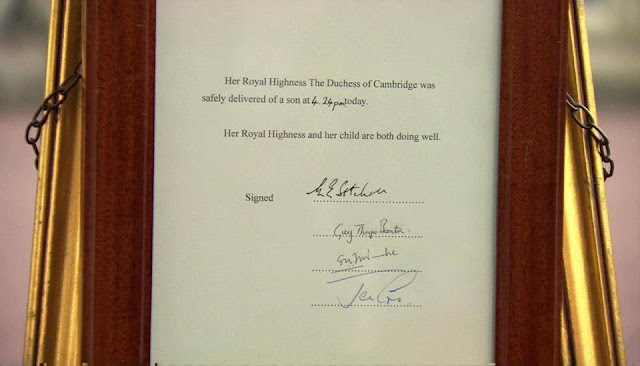 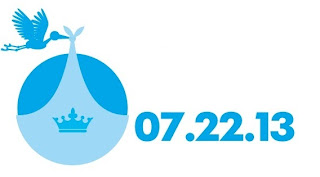 It is understood that the couple delayed making the announcement immediately so that they could enjoy some private time with their newborn. William telephoned his family to tell them the good news, speaking to the Queen, his father Charles and younger brother Prince Harry. 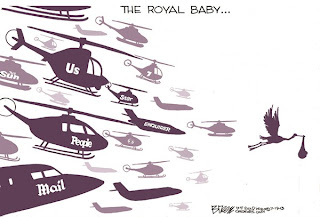 Marcus Setwell, who led the medical team which delivered the future king, said "wonderful baby, beautiful baby" as he left the Lindo wing.
The birth of the baby prince means the monarchy has three generations of heirs to the throne for the first time since 1894 and the birth of the future Edward VIII. 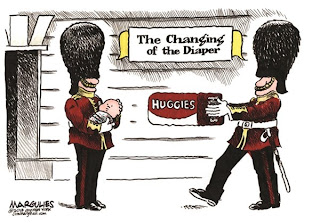 The baby is the first Prince of Cambridge to be born for more than 190 years since Prince George of Cambridge, a grandson of George III and the only son of Prince Adolphus Frederick, the 1st Duke of Cambridge. The baby is also the 41st in direct line of descent from Egbert, King of Wessex, who ruled from 802 to 839. 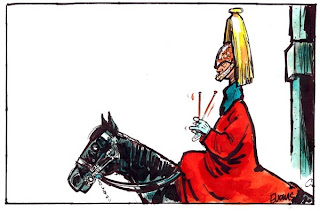 Punters who have had a flutter on the royal name could be waiting a while for the bookies to pay out. William's name was not released for a week, and his father's for a month. The favourites are George or James. Whatever name is chosen, recent precedent indicates it is likely to have royal connections and there should be a vacancy – that is, it should not be in current use by a senior member of the family. There are also predictions that the couple will honour William's father, the Prince of Wales, by choosing Charles and the Duke of Edinburgh by selecting Philip.
In a statement, Prince Charles said: "Both my wife and I are overjoyed at the arrival of my first grandchild. It is an incredibly special moment for William and Catherine and we are so thrilled for them on the birth of their baby boy.
"Grandparenthood is a unique moment in anyone's life, as countless kind people have told me in recent months, so I am enormously proud and happy to be a grandfather for the first time and we are eagerly looking forward to seeing the baby in the near future."
The newest royal will be styled HRH Prince (name) of Cambridge after the Queen issued Letters Patent under the Great Seal of the Realm when Kate was three months' pregnant. The decree said: "All the children of the eldest son of the Prince of Wales should have and enjoy the style, title and attribute of royal highness with the titular dignity of prince or princess prefixed to their Christian names or with such other titles of honour."
Following tradition, a formal notice was posted on an ornate rococo style easel – the same used to announce Prince William's birth in 1982 – in the forecourt of Buckingham Palace shortly before 9pm. Within an hour the numbers had swelled from hundreds to thousands outside the palace with locals and tourists alike keen to share in the historic moment.


The palace announced the birth in a press release. Minutes later, as crowds of well-wishers outside cheered "It's a boy", the formal medical bulletin was taken from the hospital to a waiting car by Ed Perkins, Prince William's press secretary. He handed it to a military orderly who then whisked the notice, which was signed by Setchell, the Queen's gynaecologist, to Buckingham Palace under police escort. 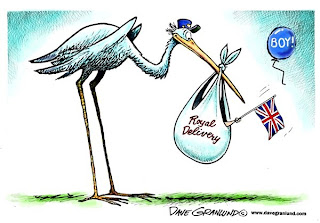 The prime minister was one of the first to offer his congratulations. Speaking outside 10 Downing Street, David Cameron said: "It is wonderful news from St Mary's, Paddington, and I am sure that right across the country, and indeed right across the Commonwealth, people will be celebrating and wishing the royal couple well.
"It is an important moment in the life of our nation but, I suppose, above all it is a wonderful moment for a warm and loving couple who have got a brand new baby boy. "It has been a remarkable few years for our royal family – a royal wedding that captured people's hearts, that extraordinary and magnificent jubilee and now this royal birth – all from a family that has given this nation so much incredible service."
Congratulations came from the White House too from Barack Obama and his wife. The president said: "Michelle and I are so pleased to congratulate the Duke and Duchess of Cambridge on the joyous occasion of the birth of their first child.
"We wish them all the happiness and blessings parenthood brings."
The Archbishop of Canterbury, the Most Rev Justin Welby, tweeted: "Delighted for the Duke and Duchess of Cambridge. May God bless them all with love, health and happiness," he said. 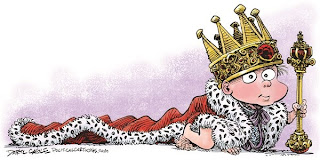