REPORTER: Britain's royal baby has a name: Prince William and his wife Kate will call him George Alexander Louis, William's office announced on Wednesday (July 24). Born on Monday to global media frenzy, the newborn who is third in line to the British throne will be known as His Royal Highness Prince George of Cambridge. The world waited just two days to hear the name...a relatively short time by royal standards, but one that still prompted a global guessing game.
DASHA, NEW YORK CITY TOURIST FROM ENGLAND: "I think it should be a royal, regal name, just for the tradition."
DREW LAUFFER, NEW JERSEY RESIDENT: "Why not have like a common first name and a royal middle name?"
SUSAN, NEW YORK CITY TOURIST FROM OHIO: "It's kingly and it was our first president too, so a lot of leaders of businesses are named George."
REPORTER: George has been the name of six British Kings. The last, George VI, was the father of Queen Elizabeth. 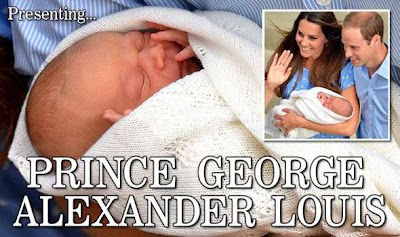 George
"George" was the name of Queen Elizabeth's father, King George VI, who reigned from 1936 until his death in 1952. He assumed the throne on the abdication of his brother, Edward VIII. His life was depicted in the Oscar-winning movie "The King's Speech."
George I, born in Germany, became king in 1714. He was followed by a line of kings with the same name, including George III, who was known for his bouts of insanity.
The name is also a patriotic choice for many in the UK: Saint George, patron saint of England, is known for his legendary defeat of a dragon in the third century. His feast day is celebrated on April 23, (the date also associated with the birth of William Shakespeare, England's most revered writer).
Despite its royal connections, George has humble origins, derived as it is from the Greek name "georgios" meaning "earth worker" or "farmer."
Other historical Georges: composer George Frideric Handel (1685-1759), first president of the United States George Washington (1732-1799), and the Pacific explorer George Vancouver (1757-1798). Authors Mary Anne Evans and Eric Arthur Blair also chose George as their pen names: George Eliot (1819-1880) and George Orwell (1903-1950) respectively. 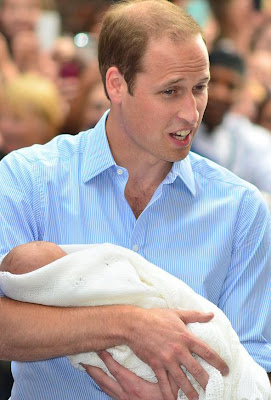 Alexander
This gallant title means "defender of men," from the Latin form of the Greek name "Alexandros." Alexander III of Macedon (356-323 B.C.), better known as Alexander the Great, courageously ruled and conquered many parts of the world before his untimely death at age 32.
The name "Alexander" is a feature of the Dutch royal family: Willem-Alexander ascended to the throne after the abdication of his mother Queen Beatrix earlier this year.
Other historical Alexanders: English poet Alexander Pope (1688-1744), American statesman Alexander Hamilton (1755-1804), Scottish-Canadian explorer Alexander MacKenzie (1764-1820), Russian poet Alexander Pushkin (1799-1837) and Alexander Graham Bell (1847-1922), the Scottish-born inventor of the telephone. 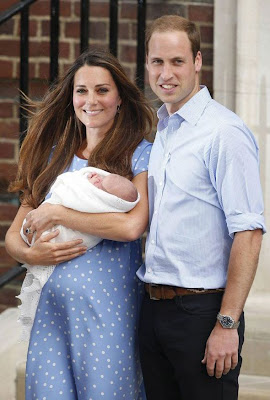 Louis
The name "Louis" originates from the English and French interpretations of the German name Ludwig, which can be interpreted as "renowned warrior."
Louis was the first name of Lord Mountbatten, uncle of George's great-grandfather Prince Philip, Duke of Edinburgh, and mentor to Prince Charles. He was killed by the IRA while holidaying in Ireland in 1979.
No British monarch has been named Louis, but it is very popular across the English Channel in France, where 18 kings have taken the name from 814 onward. Louis XIV, the Sun King, reigned from 1643 until 1715 and was hailed by many as the greatest monarch of his age because of the growth in French power and the opulence of his court, which included the Palace of Versailles.
Louis XVI was the king of France from 1774 until 1792, when he was found guilty of treason after the revolution and executed in 1793.
Other historical figures named Louis: French scientist Louis Pasteur (1822-1895); Métis leader Louis Riel (1844-1885), who led a rebellion against Canada; and Scottish author Robert Louis Stevenson (1850-1894), who wrote "Treasure Island" and "Dr. Jekyll and Mr. Hyde." 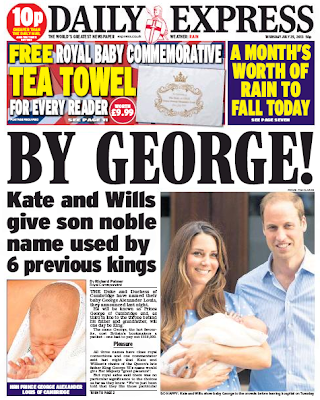 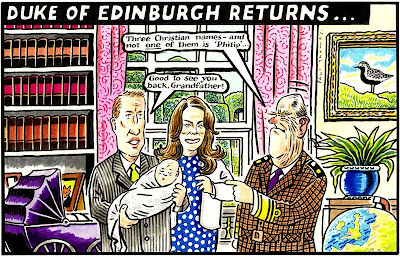 George
The name George is synonymous with British kings.
It has come to represent the continuity of the monarchy and remained the bookmakers' favourite in the name-guessing stakes from the moment Kate's pregnancy was announced.
Six King Georges have worn the crown throughout history since the German-born George I, the first Hanoverian king of Great Britain, acceded to the throne in 1714.
The first name of the last King George - George VI - was actually Albert and he was known to his family as 'Bertie' but he selected George - his fourth name - to use as Sovereign. Historic: The German-born George I, left, the first Hanoverian king of Great Britain, acceded to the throne in 1714 . King George II is pictured right
He was the much-loved father of the present Queen and the new Prince George of Cambridge's great-great grandfather. George VI chose George in honour of his father George V and to create the impression of stability after the scandal caused by the abdication of his brother Edward VIII.
George is also the fourth name of the Prince of Wales - the baby's grandfather. Even Edward VIII had George among his seven names.
The name means farmer or earth worker. It was the 12th most popular name for boys born in England and Wales in 2011.
St George, a fourth-century Christian martyr, is the patron Saint of England and represents honour, bravery and gallantry. The legend of George slaying a dragon and rescuing an innocent maiden is medieval.
There has only been one other Prince of Cambridge and he was also called George. Instead, she became known by the nickname Mrs FitzGeorge and this surname was taken by George's offspring.


Despite his marriage, George had a wandering eye and soon after he wed he took up with mistress Louisa Beauclerk, who remained his lover for more than 30 years.
He went on to become the 2nd Duke of Cambridge after his father's death.
The Duke was in the Army and served in the Crimean War. He was promoted to Commander-in-Chief in 1887 and an equestrian statue of him stands in the middle of London's Whitehall.
He was said to have been a disciplinarian, who believed Army promotions should be based on social connections rather than ability. He died in 1904.
His father, the 1st Duke of Cambridge - who lived from 1774 to 1850 - was never a Prince of Cambridge, but was given the title the Duke of Cambridge by his father George III in 1801 when he was 27. Meaning: The name Louis has deep significance in the Windsor family after Lord Louis Mountbatten was murdered by the IRA with a bomb on his fishing boat off the west coast of Ireland
Alexander
This is popular in Scotland, where Alexander III was regarded as one of the country's greatest rulers.
In April this year, Willem-Alexander was sworn in as King of the Netherlands after the abdication of his mother, Queen Beatrix.


This name has deep significance in the Windsor family in honour of the Prince of Wales's favourite uncle Lord Louis Mountbatten, who was killed by the IRA in 1979.
Louis is the last of William’s three middle names.