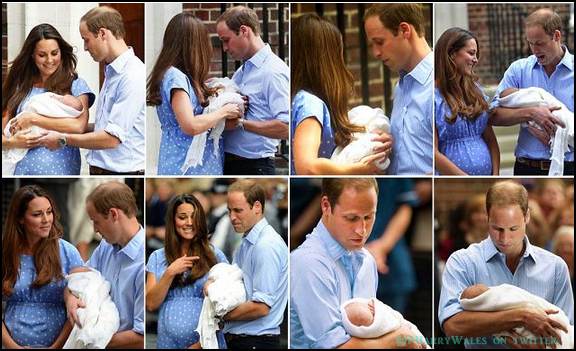 A future king has attended his first photocall aged one day old as the Duke and Duchess of Cambridge presented their newborn son to the world.
The infant prince made his debut on the steps of the Lindo wing at St Mary's hospital, Paddington, a little over 24 hours after his birth, as the duchess was discharged at 7.15pm.
Cradling the third in line to the throne on the same spot where he himself was introduced to the public 31 years ago, Prince William said they were "still working on a name".
The couple posed for pictures before massed ranks of photographers with hundreds of lenses trained on the tiny yawning bundle to capture the historic moment, with the duchess holding their son before passing him to her husband.
"He's got a good pair of lungs on him, that's for sure," said William. "He's a big boy, he's quite heavy. We are still working on a name so we will have that as soon as we can." What about George, someone asked. "Wait and see," the duke replied.
He added: "It's the first time we have seen him really so we are having a proper chance to catch up."
Kate, who chose a bespoke cornflower blue crepe de chine Jenny Packham dress for the occasion, said: "It's very emotional. It's such a special time. I think any parent will know what this feeling feels like." Her husband agreed: "It's very special."
Joking about the long wait for the media, the duke said: "I will remind him of his tardiness when he's a bit older because I know how long you guys have been standing out here. So hopefully the hospital and you guys can all get back to normal now and we can go and look after him."
The two disagreed over whom he most resembled: "He's got her looks, thankfully," said William. But Kate demurred: "No, I am not sure about that."
And yes. He had changed his first nappy. "Done that," he said, triumphantly.
"Yes, he was very good," said Kate.
Asked about the baby's hair, William said: "He's got way more than me, thank God."

The couple then drove off to Kensington Palace, with William at the wheel after he had successfully secured the child car seat into which his tiny son was securely strapped, a feat he executed with skill and a relieved mop of his brow once accomplished.
The as-yet-unnamed baby prince was born at 4.24pm on Monday weighing 8lbs 6oz after the duchess was admitted in the early stages of labour shortly before 6am that day. 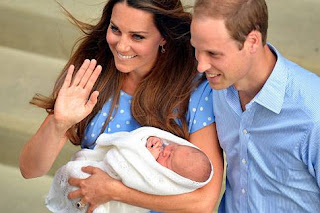 He met his grandparents for the first time on Tuesday as celebrations for the royal birth were staged across the capital and around the Commonwealth for the infant.
The Duchess of Cambridge's parents, Carole and Michael Middleton, travelling in a black cab, were first to visit the hospital where the royal couple had spent their first day as parents.
The beaming Middletons emerged after one hour, Carole telling TV cameras the baby was "absolutely beautiful … They are both doing really well, and we are so thrilled." Asked what the first cuddle with her grandson was like, she said: "Amazing. It's all coming back." Had she suggested any names? "Absolutely not."
The Prince of Wales, returning from a two-day official visit to Yorkshire, was next to roll up, in a chauffeur-driven limousine, leaving after 30 minutes and describing his grandson as "marvellous, thank you very much, absolutely marvellous – you wait and see, you'll see in a minute".
Earlier, the Duke and Duchess of Cambridge had issued a statement saying: "We would like to thank the staff at the Lindo wing and the whole hospital for the tremendous care the three of us have received. We know it has been a very busy period for the hospital and we would like to thank everyone – staff, patients and visitors – for their understanding during this time."
The bookies' favourites for the name are George and James. The couple have drawn up a shortlist but, given their son's destiny, will be consulting members of the royal family. It took one week for William's name to be made public, and a month for Charles's. 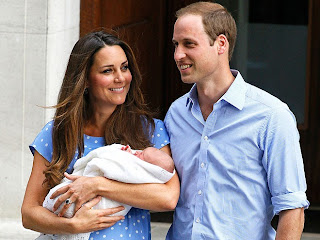 Crowds gathered throughout the day at Buckingham Palace, where the queue to photograph the official birth bulletin mounted on an easel in the forecourt was still half an hour long on Tuesday evening. As is traditional, the birth announcement also appeared in the Court Circular, the published diary of royal engagements which was started by George III in 1803. It read: "KENSINGTON PALACE 22nd July, 2013. The Duchess of Cambridge was safely delivered of a son at 4.24 p.m. today. Her Royal Highness and her child are both well. Signed: Marcus Setchell, Guy Thorpe-Beeston, Sunnit Godambe, John Cunningham." The signatories are the medical team who attended the duchess during the birth. 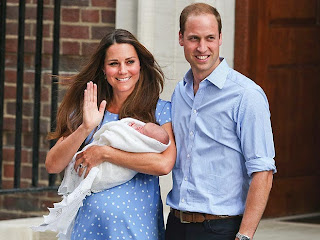 In keeping with the festivities, the Changing of the Guard saw the Band of the Scots Guard strike up Congratulations, and, appropriately, The Duke of Cambridge March. Though a couple of miles from the Lindo wing, it is a sound the baby royal will become extremely accustomed to throughout his royal life.

Elsewhere the capital was a riot of colour and sound. Central London shuddered as a 41-gun royal salute by the King's Troop Royal Horse Artillery pounded Green Park and a 62-gun salute by the Honourable Artillery Company was fired from Gun Wharf at the Tower of London.


The bells of Westminster Abbey pealed for a solid three hours. Trafalgar Square's fountains, those at Marble Arch, the Golden Jubilee bridge, and several other landmarks were illuminated by bright blue lights to mark the birth of the future king.
Niagara Falls in Canada took on the same spectacular blue hue, as did the parliament buildings in Ottawa and the CN tower in Toronto. In New Zealand, which because of the time difference had the honour of staging the first 21-gun salute outside its Wellington parliament, 37 landmark buildings were lit blue in celebration.
In Westminster, the leader of the house of Lords, Lord Hill of Oareford, moved a humble address on behalf of parliament. "May it please your royal highnesses to accept the loyal congratulations of the Lords Spiritual and Temporal in parliament assembled on the birth of a son to Her Royal Highness the Duchess of Cambridge; and to assure Your Royal Highnesses of our great satisfaction and pleasure at this news." It was passed unopposed by peers.
Messages of congratulation continued to flood in from across the globe for the boy who, as things stand, is destined to be king not just of Britain, but of 15 other Commonwealth realms.
Australia's prime minister, Kevin Rudd, announced the country's gift to the newborn would be a toy bilby, a desert-dwelling Australian marsupial, and a research project dedicated to its survival. New Zealand was sending a fine lace shawl which took more than 280 hours to weave by hand.
In India the dabbawalas of Mumbai were celebrating the birth with the Indian tradition of passing out sweets.
The Russian president, Vladimir Putin, "extended his felicitations" to the Queen, the newborn and the couple.
Even in Iran, where diplomatic relations have been suspended since the British embassy in Tehran was ransacked by a mob in November 2011, there was a measured statement from the foreign ministry spokesman, Abbas Araghchi.
Quoted on the semi-official ISNA news agency it said: "I congratulate the esteemed Queen and the heir to the throne. Apparently this baby is the third in line to the throne."
It added: "Obviously the relations between UK and Iran are too complex to be affected by the birth of a baby."
in "The Guardian" 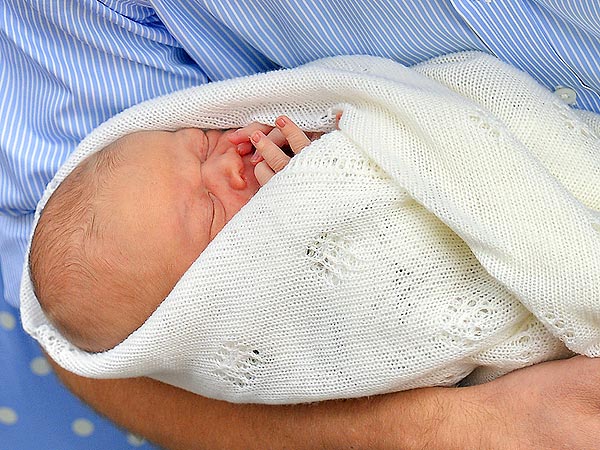